Back to School for Dove Holes Night Shift Team
When a local primary school Head Teacher approached the waiting parents in the school yard he probably wasn’t expecting the positive response he received. He was hoping to get some parental help in tidying up the school play area which had become very ‘tired’ looking. 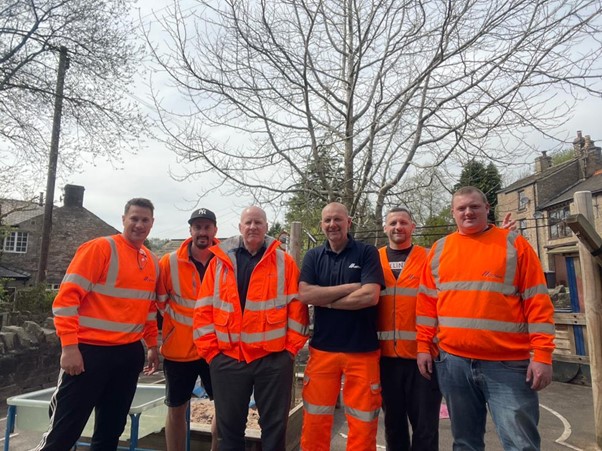 One of the waiting parents was Rick Hughes who works the night shift at Dove Holes quarry. Rick explained the lend-a-hand scheme and that as several of the Dove Holes quarry staff have children that attend the school, it would be a benefit for all concerned.

It was decided that several staff from Dove Holes would attend the school during the Easter holidays with pressure washers, shovels, a good stiff brush or two and plenty of elbow grease.

The main focus of the day was to tidy up all the dead leaves and litter and to remove the algae off the play ground which was becoming unsightly and slippery. The CEMEX team also managed to tidy and weed several flower beds as well as making several runs to the local recycling centre.

Rick Hughes, who organised the event, commented: “It’s very satisfying to get back out and give a little bit back to our community whilst benefiting our children at the same time. The gratitude shown by the school and parents has made it all worthwhile and I hope this event will encourage more people to arrange such a day.”